Hah! Just made it! Entry for waywardmixes Round #30: magic

Both covers are taken from artwork for the show, just with text added... because when you've got pix this gorgeous, why not use them? This is also the quickest set of covers I've made in ages... maybe it's the artwork, but these are both my first draft - I was just really happy with the font and colours and blocking I chose first try!


as always, zip on mediafire


Fandom: Fate Stay/Night: Unlimited Blade Works (anime tv series)
Subject: The Fifth Holy Grail War, and some of the Servants and Magus who fight in it.
Title: Our Unholy War.
Warnings/Notes: mentions of violence, and some truly sickening child abuse. Major spoilers for the show! 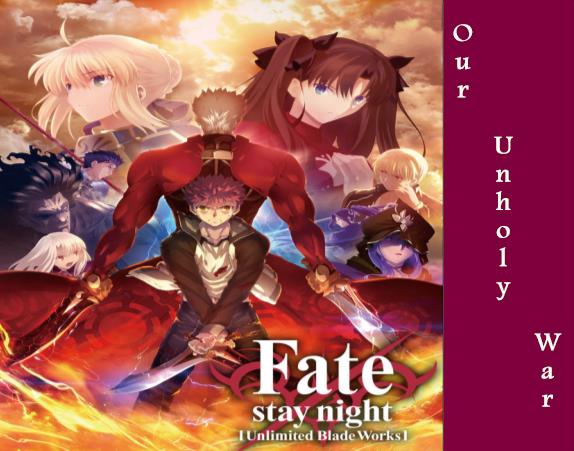 Characters shown: Centre are Shirou and Archer, back to back. Clockwise are: Illyia, Beserker, Lancer, Saber, Rin, Gilgamesh, Assassin (though you have to squint) and Caster.

About the fandom:
( Collapse ) 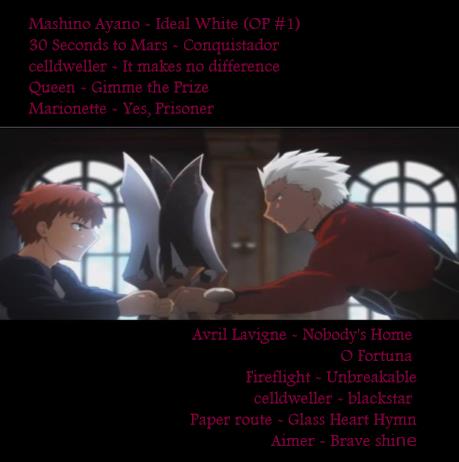 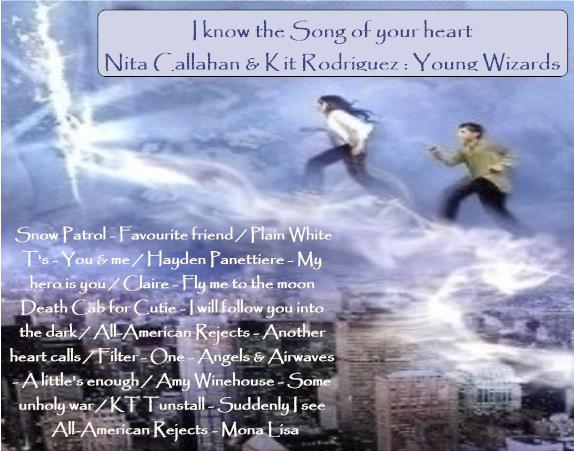 Okay, as day 29 of my project 31 Nights from Dusk till Dawn, I finally finished off the two EP fanmixes I've been percolating since last... what, August? When I finally realised this show existed and how awesome it was?

I've put both of them together this time for ease of access. Tracklistings are behind the cuts 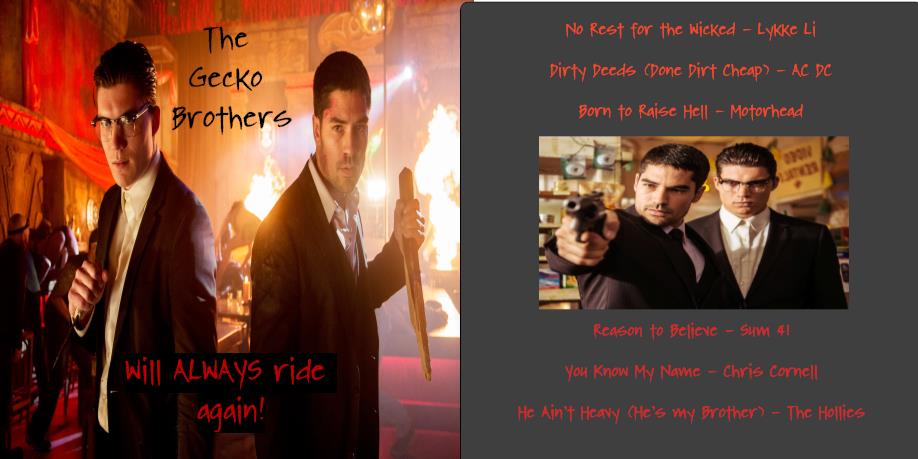 I did the Seth & Kate cover in just one pic, because I want to start uploading all my fanmixes to 8tracks eventually, and they only allow one pic. Think I might edit it a little to make the songlist clearer first, though.
ETA: now edited and improved! 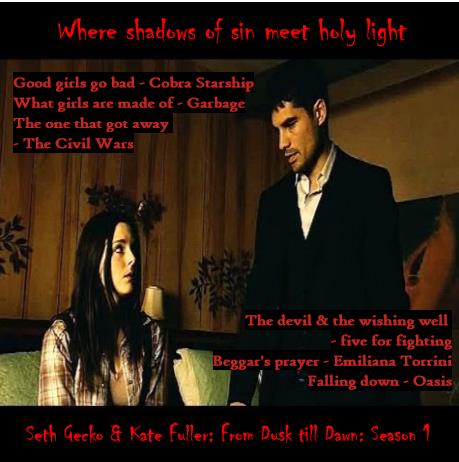 So after just over a year, waywardmixes is back!!! So for the #28, they chose the theme 'shiny and new' - or mixes about shows, books, movies, or other fandoms that have been released since July 2014, when the last round was supposed to end.

It was a tough call between two of my shiny new fandoms, Daredevil and Scorpion, but the second won out because... well, I thought that someone else would be doing Daredevil anyway, because it's been such a phenom. But at least I can do it later!

I picked a ship!mix for Walter & Paige, because they're the couple I'm shipping right now that have actual progress, albeit at a very slow burn (Matt and Karen are still very much in the friend zone. But the Avocado trio are an awesome friendzone!), and aren't currently sunk in the Bermuda Triangle in canon (unlike SkyeWard from Agents of SHIELD, or Victor and Lily from Penny Dreadful). Although from what little I'm seen of FDTD season 2, I have some actual hope for Seth and Kate. But given that show, I'm just hoping they both make it to the end of the season alive....

Anyway, onto the mix! The explanatory bit for waywardmixes is below the covers, with the full tracklisting below that. 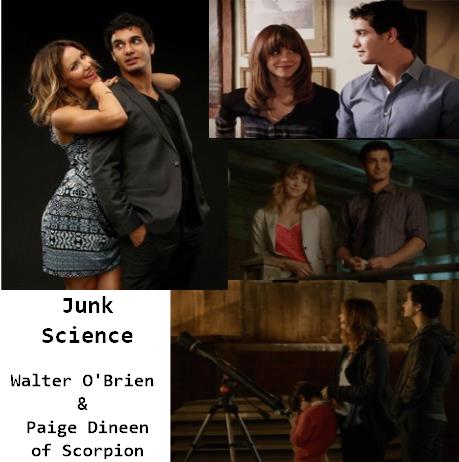 I was trying to get some of the pics to overlap each other at strategic points; I thought it looked interesting. Not sure how well it turned out. (sigh) I really need to properly learn how to use photoshop or something and lift my graphics game. 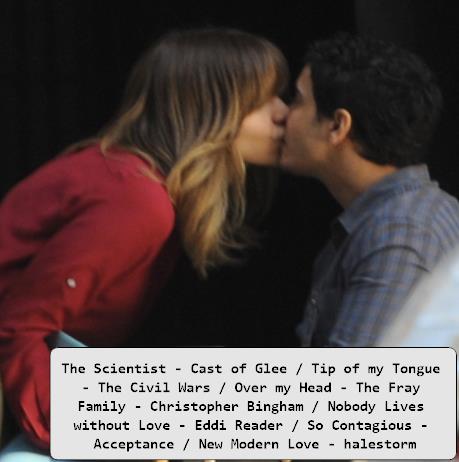 Wouldn't you know it? I actually get this done early, and the @##%! modem breaks!

Anyway, since my last two fics for casestory were both crossovers with 'Grimm', and I had a great time with both, I thought I'd keep the habit. Wise choice! 'Take the stars from my eyes' is a really interesting fic - I'm looking forward to reading the complete story.

'Take the Stars from my eyes' by karennia_rune: read it here on AO3

Did a title page, and fanmix - which probably would have been longer, if I'd had a longer draft, but oh well. I originally had an idea about using all Irish artists (thus the two U2 songs), since this fic focuses on the Celtic myth/legend of Cu Chulainn. 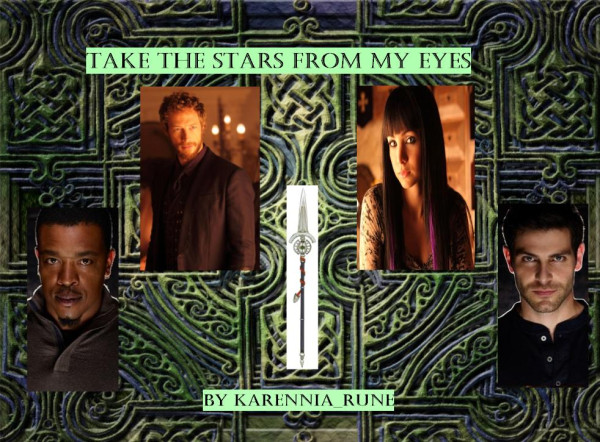 I used a shot of a forest for the fanmix cover because forests seem to be a bit of a running theme in the story - and in both shows, come to think of it.

mediafire download for fanmix (cover and tracks) (one song NSFW)


Song tracklisting (no real spoilers here, for once)
Blood of Cuchuulainn - Jeff & Mychael Danna (opening credits and scenes. It's from the Boondocks Saints movies; I tried it for the title, and found the music worked really well)

Elevation - U2 (Rory's POV on how Maggie makes him feel)

I still haven't found what I'm looking for - U2 (meant to be a 'montage' song, with Nick, Hank, Dyson and Kenzi all looking for answers they're having a lot of trouble finding! And yes, this is my sense of humour coming out again)

Moondance - Nightwish. (Rory's flight and the Grimm Fae Gang's pursuit. Something about this track always makes me think of running through the woods)

Take it Home (Riley's Siren Mix) - thenewno2 (end credits. Since Dyson and Kenzi's secondary mission during all this is just to get the heck home, I thought it fit. And I really like the song) 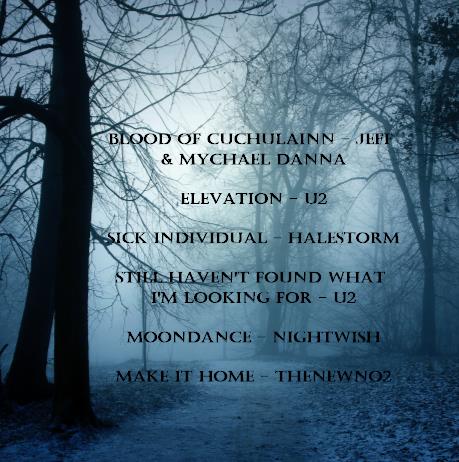 finally, waywardmixes round #25 is giving me the boost to post my fanmix for Mary and Marshall of In Plain Sight!

The series final of IPS was such a damn clusterfuck - for every Mary/Marshall shipper, and to a certain extent most fans of the show - that the shipper mix I was working on HAD to go past the series and fix things... so this mix is part 'shipper, part fix-it, and actually always has been!

For those who've never seen it, In Plain Sight (which features in a few other entries here in my LJ, if you click the tag) is a TV show that ran from 2008-2012, about two US Marshals who work in the Witness Protection Program, played by Mary McCormack and Fred Weller.

Mary Shannon is fiery, stubborn to the point of death, prickly, intensely loyal (mostly to people who don't deserve it), downright phobic of change and terrified of any kind of committed relationship, and very, very damaged by her shitty childhood (more on this in a minute). Marshall Mann (yes, he's Marshal Marshall!) is laid-back, a font of trivia and interesting hobbies, intensely loyal (mostly to people who DO deserve it) and while he has some family angst of his own, is far more stable and well-adjusted than Mary - and an unofficial part of his job is following Mary around and picking psychic shrapnel out of everyone who she mows down in the course of her average day. They are both utterly badass (though Marshall hides it better), superb at their jobs, and a near-matchless team.

The title comes from their Marshal's badges, and a long-standing love of pie that has become part-tradition, part-running gag between them; one of Marshall's many catchphrases is 'Pie makes everything better'. 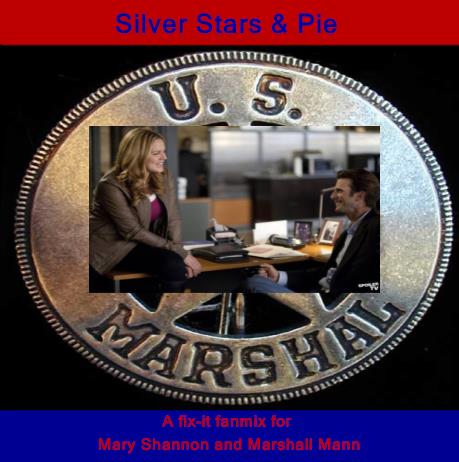 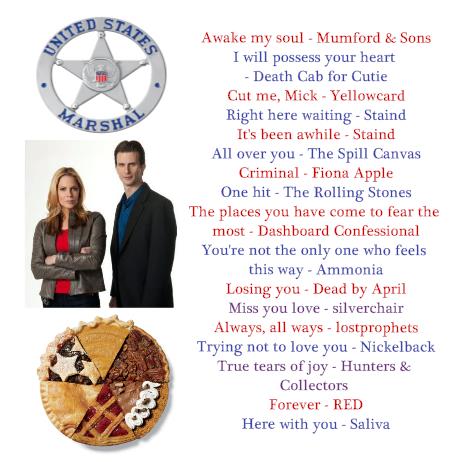 ZIP file can be downloaded at mediafire

more or less finished for years! Finally managed to drag it out of mothballs for waywardmixes #24: OTP.
Please excuse the not-very-good covers - Lynley and Harvers deserve better, but these were actually some of my first real attempts into graphics. 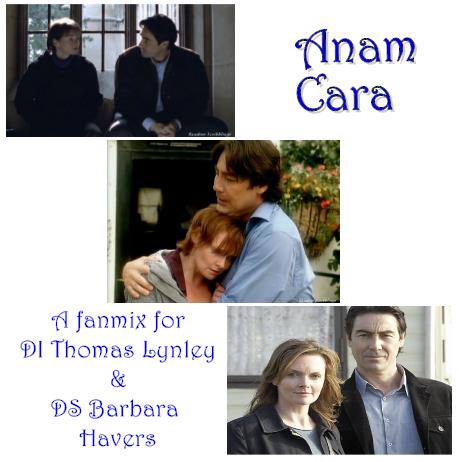 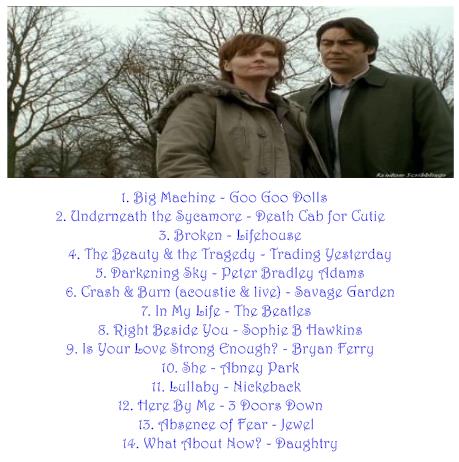 ZIP file can be donwloaded from mediafire HERE

Anam Cara: a fanmix for Detective Inspector Thomas Lynley and Detective Sargeant Barbara Havers
(fandom explanation and tracklisting under the cut) Turns speculative at the end, because of the show's abrupt cancellation halfway through S6.

WARNINGS: spoilers for both seasons of TSCC, including the very end of the finale, and one song has NSFW lyrics.

I actually made this mix ages - as in years ago - but for some reason, I never posted it anywhere (probably because I was thinking about using several of the songs on other mixes at the time). waywardmixes has yet again prompted me to get the lead out! (I've got at least three other mixes that are not-quite-finished that I'm going to post, too!)

zip file containing front and back covers, tracklisting, and songs HERE at mediafire 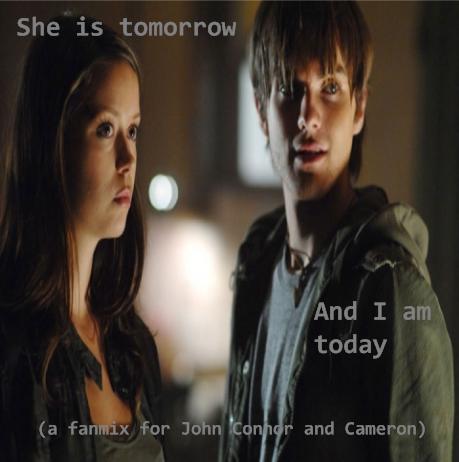 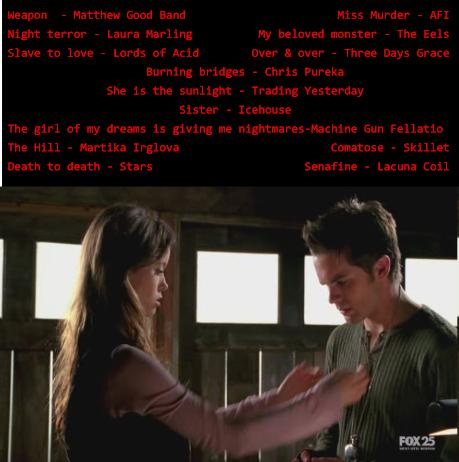 (explanation for waywardmixes and tracklisting under the cut)

Thought I'd throw my hat into the ring at

waywardmixes - it should still be the 20th over in the US, right? *hopeful look*

I thought it would be SO EASY to assemble a fanmix for Phryne Fisher - umm, not so much. About 1/3 was easy; another 1/3 was cannibalised from my potential Jack/Phryne shipper mix, and another 1/3 I just couldn't work out until today.

The covers gave me some issues, too - I really wanted some Art Deco fonts for this. Finding them was relatively easy, so was installing them once I read the instructions properly. But the program I do my initial runs on wasn't registering them, so I switched to paint which won't let you alter the text once you click off it! I spent four attempts trying to get it right, until I tried my initial program again - guess once paint acknowledges it, so will the other. Really need to look into photoshop at some point.

But I am really proud of how the covers turned out! The art deco wallpapers came out rather nicely, didn't they?

This includes all songs and the 3 covers. I didn't put in the tracklisting, this time, because wayward requires a short blurb about the fandom - naturally, mine ended up being a full page in Word! *eyeroll* 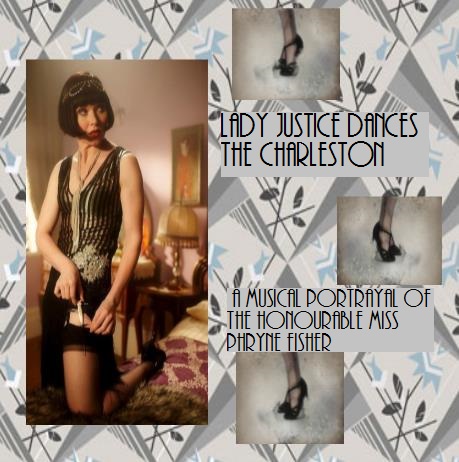 So for my next trick... I will make a white rabbit disappear!

Well, no - I decided to do an Eliot/Parker fanmix, because I've always shipped them (no offense to Hardison - I like you too! Just think she's a better match with Eliot). I was a bit worried no one would pick it, but i did get someone and she has also written a great fic! (I've been really lucky that way so far, with reverse bangs.)

The title is a quote from one of the Nightside books by Simon R Green - actually, I think it might be a paraphrase, pretty sure I got it off an LJ icon originally. I picked it because, well, it sort of sums up one of the primary reasons I think Eliot and Parker would work as a couple; they're familiar with the darkest parts of themselves - they've lived in those parts of themselves, and come out the other side. They're willing to cross lines that Nate, Sophie and Hardison won't even consider.

zip file link (download includes front and back covers, tracklisting and all songs):
We like the dark @ mediafire

tracklisting under the covers. 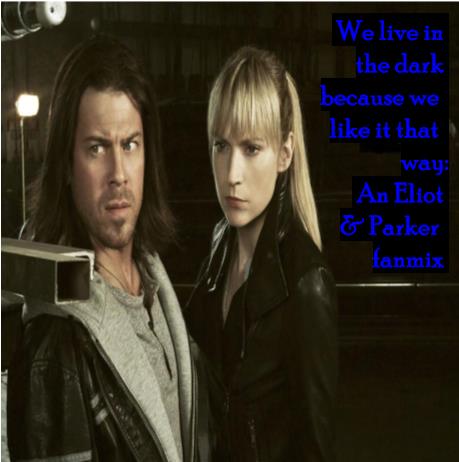 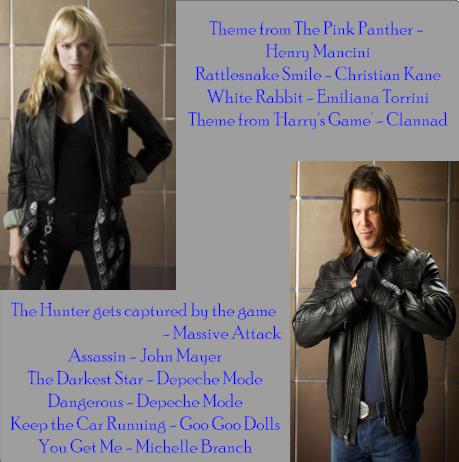